Hunstanworth is a very small village just over the border in County Durham and nestled on the fells of the North Pennines. It’s one of just fifty-four ‘Thankful Villages’ and the only one in Durham.

The names of the Hunstanworth men that served in WW1 are recorded as:-

However, research by myself has identified at least two other men from the Village that served in WW1 and returned home.

James was born in Hunstanworth in 1895 and was the youngest son of John and Elizabeth Hannah Westgarth. He had two older brothers Willie (b 1886), John Hildyard (b  1889) and a younger sister Florence Lillian (b. 1898).

At some point during 1916 he transferred to 12th Battalion (perhaps after being wounded?) 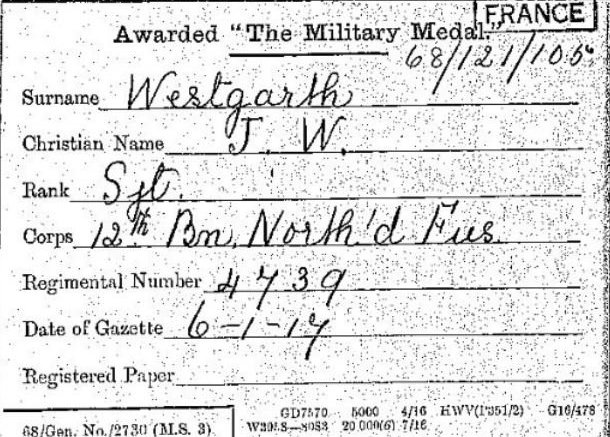 James was awarded the Military Medal, which was announced in the London Gazette of 5th January 1917.

On the 16th May 1918 John and Elizabeth received news that their Son had been posted missing on the 23rd March; however, several days later they received a letter from James stating that he was wounded and a prisoner. 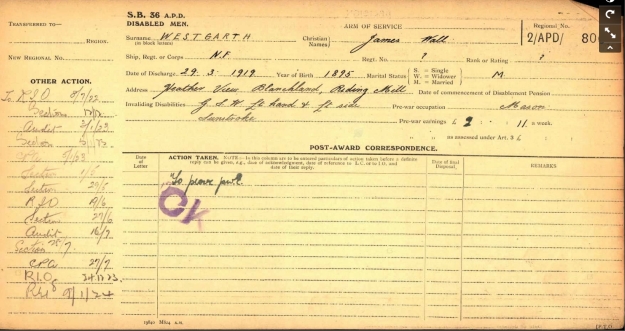 On returning home James was awarded a pension and continued to work as an Estate Stonemason.

NOTE: James’ two elder brothers Willie and John also served in WW1, but at the time they enlisted Willie had married was and living in Rookhope and John had moved to Muggleswick.

John was a gas and oil engine attendant and joined the Royal Flying Corps in June 1916.

Note: this is still a work in progress.